« Home | Texas - Home of The New American Concentration Camps » | Reconquista!: A Nativists Creation » | Whinning Her Way To Their Hearts » | The Lunacy of Michelle Malkin » | Hey Teacher Leave Those Kids Alone! » | Ax the Dobbs » | Fighting Among Each Other » | Here Is To Another Thousand » | April 10th: The Day 2 Million People Said BASTA! » | María Luisa Alvarado: ¡Si, Se Puede! »

Duke at Migra Matters reported about an internet video game that has been passing through the internets. But this is not just any ole computer game, there is a little more to it.

Lastly we have the story of a flash-based video game that's spreading through internet via e-mail called "Border Patrol". The object of the game is to kill as many "wetbacks" as possible as they scramble across the US border. The targets included: 'Mexican Nationalist,' 'Drug Smuggler,' and 'Breeder' (pregnant woman with two small children).

It was reported on NBC San Diego that the site is being run a neo-Nazi site called "The Insurgent" who is run by jackbooted fascist Tom Metzger.

The game is part of a Web site called "The Insurgent." Information on the Web site says that it is based in Temecula, Calif., just north of the San Diego-Riverside county line. The site claims that Tom Metzger, the head of White Aryan Resistance, is responsible for the content.

"Border Patrol" is just one of five games on the Web site that targets people because of their race. 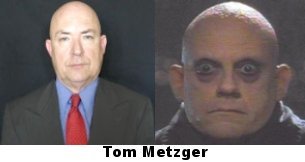 So who is Tom Metzger? Metzger, is a former television repairman from Fallbrook, California, may be America's most notorious hatemonger. His nearly 30-year career in the radical right has included affiliation with the John Birch Society in the 1960s, the Ku Klux Klan (KKK) in the 1970s, which was led by David Duke at that time. Metzger became the Grand Dragon for the State of California. Metzger was also a minister in the Christian Identity movement. Metzger continues to cultivate his flying monkey squad through his web site, Resist.com and his monthly newspaper, White Aryan Resistance (WAR).

After a fight with David Duke, Metzger broke away from KKK to form the California Knights of the Ku Klux Klan. But this is were the story gets really interesting. In 1980, this jackbooted racist won the ended up winning the Democratic Party nomination for the US House of Reps in a San Diego-area district, but before the primary Metzger was a registered Repthug, but changed party.

In 1980, Metzger won the Democratic Party nomination for the U.S. House of Representatives in a San Diego-area district with over 40,000 votes. Metzger had changed his party registration from Republican to Democrat earlier in the year. The Democrats disavowed Metzger's candidacy, instead endorsing incumbent four-term Republican Clair Burgener. Metzger lost by over 200,000 votes in November to a several-term incumbent in a heavily Republican district.

As to why he registered as a Dem, who knows, it was never said, however, it is pretty interesting the well known anti-immigration politician Pete Wilson, who severed as CA’s US Senator and Governor, was Mayor of San Diego (1971-1983) during the time all of this happened. Wilson’s US Senator (1983-1991) election was at the same time Burgener decided no to run for re-election and Metzger decided to run also for the US Senate in 1982. winning almost 76,000 votes (and 2.8% of the vote) in the Democratic Party Primary. Nah...must be the tin foil is on too tight. Or maybe...in John Wester's Taxqueña, story about three migrants who run the border and into the KKK, Wester does provide an interesting take on Metzger's little stint as a Democrat.

The brotherhood in this case is the Ku Klux Klan. In 1980, the Republican incumbant, Claire Burghner, was running unopposed in his San Diego congressional district. The Democrats didn't want to waste their money running against him as they had in the past. On the last day one could file to run in the primaries, Tom Metzger, one time Grand Dragon of the KKK and head of a group of racists called WAR, White Aryan Resistance, filed to run in the Democratic primary. The Democrats hastily threw in a candidate to run against Metzger, but Metzger had the jump on them and won. He ran against Burghner in November.

Metzger lost, of course, but for the few months leading up to the November election, he sat on the Democratic Central Committee, which was mandated by the Democratic Party's policy. From this bully pulpit, Metzger advocated patrolling the Mexican border by upstanding patriots, to stop Mexican migrants looking for work from crossing illegally, The Ku Klux Klan answered the call.

That summer, 1980, there was a small article buried in the back pages of the San Diego Union stating that in the course of the last year, 50 bodies of murdered Mexicans had been found in the hills, mountains and deserts of San Diego county.

In 1995, in Mother Jones, California Schemer: What You Need to Know About Pete Wilson, Dale Maharidge writes how Pete Wilson changed from liberal to a conservative:

When Wilson was elected mayor of San Diego in 1971, he protected wetlands and fought developers. More significantly, he forced the city and its contractors to hire minorities.
...
Robbins and Kearse agree on the moment Wilson changed: in 1972, when the Republican National Convention, set for San Diego, was abruptly switched to Miami. There were several reasons, among them the fear of anti-war protests.

Wilson took the decision personally, says Susie Davenport, also one of Wilson's first minority hires. "He was angry. He figured that the liberal Pete that we knew was no longer going to make it to where he wanted to go. Minorities simply could no longer help him accomplish his goals. All of a sudden we could do nothing right. Everything changed."

It is interesting that Metzger and Wilson have the same view with it comes to immigration. When Pete Wilson was governor, riding on the success of the racist Prop 187, the initiative that sought to deny education and other services to illegal immigrants and later struck down in 1994, Wilson decided to run Willie Horton-like attack ads depicting a bunch of wily Mexicans invading the Mexico-California border. In other words, he decided to scare Californians to death by spreading propaganda about some Mexican invasion. The same scare tactics being used today.

But the most interesting is Metzger's renewal interest in CA politics when Arnold Schwarzenegger ventured into the governor's recall election. Schwarzenegger who ran his campaign modeled after Wilson, one would think some like Metzger would endorse Schwarzenegger. Not so. During the recall election, Pete Wilson, who happened to be chairman of the Schwarzenegger campaign, Metzger decided endorse California Lt. Gov. Cruz Bustamante, the second statewide Hispanic officeholder in California’s history as an American state.

A self-described racist has endorsed California Lt. Gov. Cruz Bustamante in the California recall election, praising the candidate for being what he calls "a separatist," based on Bustamante's past association with a racist Hispanic organization.

The unusual endorsement by Tom Metzger, former Grand Wizard of the California Ku Klux Klan and director of the White Aryan Resistance, was accompanied by a call for all like-minded Californians to vote for Bustamante in the Oct. 7 election.

The so called racist organization is Movimiento Estudiantil Chicano de Aztlan, more widely known as MEChA, aan organization Bustamante was active in while he was a student at Fresno State College in the 1970s. It was because of this type propaganda about this organization, Bustamante lost the election. Before the election Bustamante did have the lead and it did look like he would have won, other may differ, but according to the Feminist Daily News Wire, on September 10, 2003, Bustamente was ahead by 5 points.

A significant gender gap favors California's current lieutenant governor over leading Republican challenger Arnold Schwarzenegger in the upcoming recall election in California. Lt. Gov. Cruz Bustamante, a Democrat, is ahead in a recent statewide poll by 5 points, but among women voters he is ahead of Schwarzenegger by 13 points. The recent withdrawal of Republican Peter Ueberroth did not impact the standing of the leading candidates in the California gubernatorial recall election, according to a Field Poll released today. Bustamante is also ahead of Schwarzenegger in most racial/ethnic categories, most significantly leading by 39 points among African-American voters.

But it was at that time in September, - one month before the election, and a political manuever right out of Karl Rove's playbook - information about Bustamante's involvment in MECha spread like a California wild fire. It doesn't help when you have a head of a white supremacy group being quoted saying:

"Since we feel just the opposite [of MEChA], that Southern California must be reserved for the Euro-American people, then at least we're getting the main issue out on the table," said Metzger.
...
By endorsing Bustamante and drawing more attention to MEChA's stated agenda, Metzger said it would force Californians to confront the issue of illegal immigration. "The immigration thing has to be brought to a head, and I feel that the best way to do that is endorse the worst, in the sense of he is a racist and he knows what I'm talking about," agued Metzger.

Too many coincidences between Metzger and Wilson, but then again, it could be that tin foil is on too tight.

So it is not surprising to find out Metzger is behind this game. And whether or not Metzger and Wilson have been secretly working together playing opposites of each other, that is for history to decided.

Latina Lista said it best regarding Metzger and his vile game:

During these times, this game and other "Border" games that have been circulating on college campuses expose the ugly side of human nature.

I know that the people who promote those games say they are trying to make a point about the state of immigration affairs but the point is lost when people are stripped of their dignity and their value as humans.

Just because someone is illegal or undocumented does not make them less human or deserving to fight for their survival.

Update: A 16-year-old Hispanic boy was beaten, sodomized and left for dead by two neonazis who said they believed he had tried to kiss a 12-year-old girl at a party. But prosecutor will not charge them with a hate-crime. It was first reported it was a white girl, but now the reports have changed that it was a Hispanic girl. Something is fishy. Details of the brutal crime can be read here.