Regardless of the political season, the issue of immigration is always considered a hot topic. In fact, the topic of immigration brings out every political spectrum when trying to solve the issue. Moreover, the most vocal of the groups most likely are xenophobic hate groups. Frighteningly, their presence have seeped into Congress and are constantly advocating for draconian measures to be included in any type of immigration reform bill. Even more alarmingly, nativism – a movement which is oftentimes fueled by xenophobia and hate – have already entered into the mainstream media.

Nativism, the hostile reaction towards the flux of immigration, is not really a new phenomenon that currently was spawned within this new century. According to David Bennett, author of The Party Fear, nativist movements usually occur during times of major social, economic, or political disturbances are taking place. Oftentimes, American nativists will project their insecurities on the immigrants, ethnic/religious groups, or anybody different from their own for the troubles that America is experiencing.

It is interesting to note, the Immigration Act of 1965 signed by President Lyndon Johnson is considered to be part of Civil Rights legislation. Along with the Civil Rights Act and the Voting Rights Act, the Immigration Act became one the cornerstones to the Civil Rights Movement. The Act, was to rid the nation's history of racism and discrimination in immigration. It removed barriers based on national origin, and measures favoring immigrants from Western European countries. It also opened the door to more diverse patterns of immigration. Now, those changes and the Civil Rights tradition are once again under attack. The anti-immigrant sentiment is sweeping the country like wildfire.

Inspired by political successes in Arizona, and fanned by national and grassroots anti-immigrant groups, and like the predecessors, nativists continue the tradition of misrepresenting and disguising "their xenophobic and racists beliefs in order to garner favor with the American public."

One can expect to find groups like "Minutemen," who are trying to frame themselves as brave souls who are taking it upon themselves to protect our borders from lazy, shiftless, drug smuggling South-of-the-Border immigrants. In fact, they had to armed themselves, just in case they were attacked from violent border runners, particularly in the middle of the desert, at night, when no one else was around. 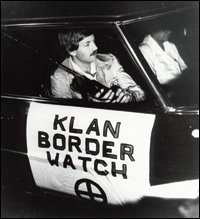 So it is not surprising a group like The Minutemen are reported to have to racist, White Supremacist groups. In fact, Minutemen found Chris Simcox and Jim Gilchrist are following in the footsteps of other anti-immigrant activists before them. Klansmen were on the Mexican border 28 years before the Minutemen came up with this bright idea. In 1977, the Knights of the Ku Klux Klan lead by David Duke and Tom Metzger also hatched the same plan of taking the law into their own hands to keep immigrants at bay. They formed Klan Border Watch, a KKK vigilante border patrol in southern California. The "Klan Border Watch" claimed to stretch from Texas to California, and was part of the "battle to halt the flow of illegal aliens streaming across the border from Mexico." 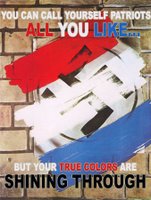 The Minutemen may speak of patriotism, and claim they have "no affiliation with, nor will we accept any assistance by or interference from, separatists, racists, or supremacy groups" but the simple truth, it just another public relation bullshit spin. Even more sickening, trigger happy white, jack-booted, skinhead members from the neo-Nazi National Alliance and other sick white supremacist groups are chomping at the bit to participate.

Perhaps most disturbing is Jim Gilchrist's partnership with Swift Boater Jerome Corsi to write a book about Mexico's conspiracy to trash America: [Hat tip to Orcinus.]

Jim Gilchrist, co-founder of the Minuteman Project, and Jerome Corsi, Harvard Ph.D. and co-author of the #1 New York Times bestseller "Unfit for Command: Swift Boat Veterans Speak Out Against John Kerry," have teamed up to write a shocking account of the endless flow of drugs, terrorists, and economic refugees at America's borders -- and to expose the Mexican government's open complicity in this full-fledged crisis. The to-be-titled book will be published by World Ahead Publishing and available in bookstores nationwide this July.
...
"Illegal immigration is bankrupting states along the border, but this is about more than economics -- we're placing our national security at risk," says Gilchrist, who along with other Minuteman Project volunteers has come under fire while on patrol and carrying nothing more than binoculars and cell phones. "Drug lords and violent gangs like MS-13 are streaming into the U.S. from Mexico. Terrorists are also walking in unopposed; our southwestern border is littered with Arabic papers and Islamic prayer rugs."

Sure it is easy to dismiss this book as a "joke," but this is exactly how propaganda is supposed to work because propaganda can be either blatant or subtle as a joke. Once that stage is completed, they will employ symbols (e.g., waving the flag) to stir audience's emotions to win their approval until their the sick agenda has been met. And what once was considered an "outrageous idea" - the creation of Fortress America

The December House vote of 260-159 is the strongest endorsement yet for building a wall, which Rep. Duncan Hunter, a San Diego County Republican, has been pushing for two decades as a tactic against illegal immigration. Support for the wall was even stronger than for the bill it was attached to -- a larger plan to curb terrorism and illegal immigration sponsored by Wisconsin Republican Rep. James Sensenbrenner that passed 239 to 182.

This movement must be halted before any outrage to stop America's xenophobia will be easily ignored.